What is a confusion matrix and how do I use binary classification metrics? 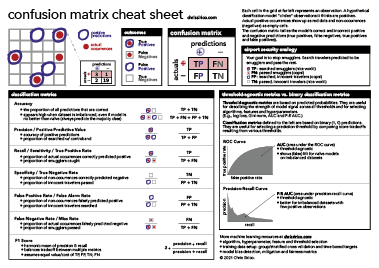 I created an early version of the confusion matrix cheat sheet to keep at my desk as a quick reference for the definitions of machine learning classification metrics. Once I had it, I found it was useful in explaining model evaluation to business stakeholders and mentees in my work as a data scientist. I wanted to create a digital version to share with the data science community, and hopefully you find it as useful as I do.

What is a classification model?

Let’s start with some definitions:

That will get us started, and we’ll define more terms as we go.

In machine learning, classification models are trained on historical data to make inferential predictions about the unknown class membership of a new observation.

Imagine we’re creating a classification model for use at an airport security checkpoint. We want to identify smugglers, so our binary classification target is 1 for smuggler and 0 for innocent traveler. The model might use the subject’s travel history or image data from an X-ray machine as feature inputs to make its predictions. For the purposes of this article, however, we’re going to ignore the model’s inputs and just focus on evaluating the quality of its predictions.

What is a False Positive, etc.?

To visualize this, let us represent our travelers as boxes. Smugglers have red dots and innocent travelers are empty boxes. The model circles the travelers it thinks are smugglers and ignores those it thinks are not.

From this, we can see that our model can be right in two ways and it can be wrong in two ways. These four prediction outcomes will populate the confusion matrix for our model: 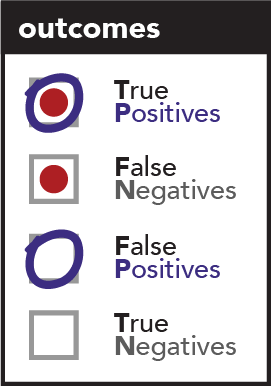 Each of these types of predictions has three dimensions:

Note that of these dimensions, only the first two are made explicit in the names we use for each prediction outcome. For example, we know a False Positive prediction is a positive prediction that is wrong, but we must infer that the actual outcome was negative. This is annoying. In fact, that it’s a common joke that the confusion matrix got its name for being so confusing! The only piece of advice I can offer is to refer to the direction of the actuals as occurrences / non-occurrences or events / non-events to keep them distinguished from positive / negative predictions. If you have an alternative set of vocabulary, please share it! 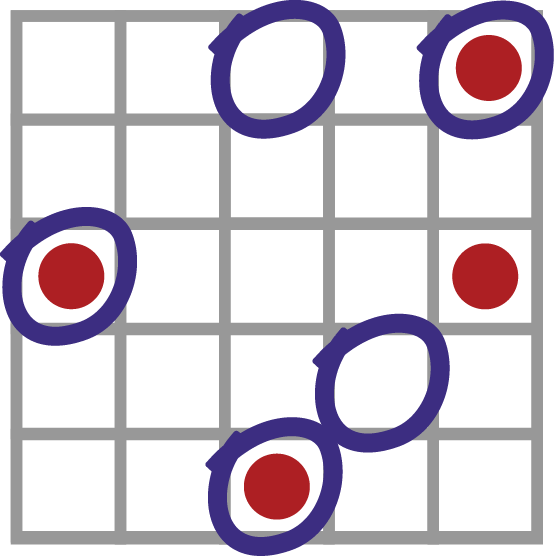 Back to our model. Imagine the model was trained on historical data where the actual guilt or innocence of travelers was determined by manual searches. Imagine we held out 25 of those observations from the model’s training data and set them aside as an out-of-sample validation set. This is important, of course, because we want to know how well our model generalizes to unseen travelers, not how closely fit it is to the original data. So we use our model to make predictions against the 25 validation rows and calculate our confusion matrix accordingly.

Each cell in the image above represents an observation of a traveler. Our model “circles” observations it thinks are positives. Actual positive occurrences (of smugglers) show up as red dots and non-occurrences (negatives) as empty cells.

What is a confusion matrix? 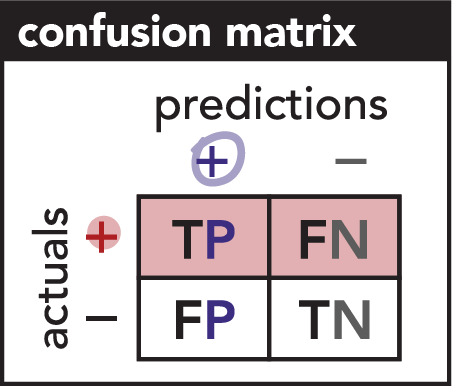 Here, our confusion matrix shows the positive / negative direction of our model’s predictions as two columns, and it shows the travelers’ actual status as two rows. 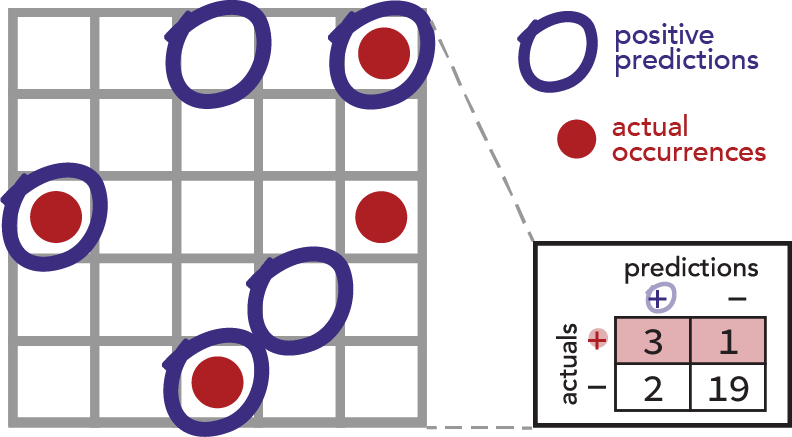 It bears repeating: the name of a quadrant refers to the positive / negative direction of the model’s predictions and their correctness. The actual occurrence / non-occurrence of the event itself must be inferred. The key is to remember that “False Positives” is really referring to “falsely positive predictions” (and likewise with False Negatives).

What are classification metrics?

Seeing the counts in each quadrant can give us a vague sense of model performance, but we can do better.

To see how, consider a few questions we might want to answer about our airport security model:

The most intuitive of these is the Accuracy question. You might already imagine dividing the number of correct predictions by the total number of observations. Here, that’s 22 / 25 = 0.88, or 88%. We can also express this ratio in terms of the confusion matrix quadrants: (TP + TN) / (TP + FN + FP + TN)

Next, consider the question about searching innocents. The relevant population is all innocent travelers. Notice that this is represented by the bottom row of our confusion matrix. The proportion of that population that our model falsely marks positive is of particular interest, and we therefore derive the False Positive Rate metric thusly: (FP) / (FP + TN)

And so we can see that most of the classification metrics are rates / proportions constructed in a similar way. Except for Accuracy, they each use a row or column as a population of interest and describe how large one of its cells is as a proportion of it. Binary classification metrics are listed in the bottom left section of the cheat sheet and in the section to follow.

Returning to our example questions, think about the population relevant to the question about the proportion of smugglers that make it through the checkpoint. Can you find a relevant metric from the list below?

What about the proportion of searched travelers that are smugglers? Which count would you divide by which? Do you see a name for that metric in the list?

(Answers posted at the end of the article.)

These are the most-used of the binary classification metrics derived from the confusion matrix:

Note that with F1 Score, we assume that all quadrants of the confusion matrix are created equal. That’s not usually the case. For instance, we might say it’s worth $100 to catch a smuggler (the True Positive reward) but we only incur a $10 penalty if we search an innocent traveler (the False Positive cost).

If we chose a model with the highest F1 Score, we might be too risk averse, searching too few people overall and letting pass more smugglers than optimal. There are other F-beta scores that weight the quadrants differently, and we could choose one of those.

An even better solution might be to treat our use case as an optimization problem where we solve for some quantitative value (such as dollars) instead of trying to maximize an arbitrary metric. We’ll discuss this in the section “Business simulation and cost-based threshold selection” below.

Classification considerations in the real world

Most binary classification algorithms also allow for probability predictions, also known as raw scores. These are decimal values between 0 and 1 that seek to express the probability that an observation is an instance of the event of interest. This is useful because it gives some sense of how confident the model is, and it allows us to make our model more or less sensitive by changing our prediction threshold. But we’re suddenly faced with the problem of choosing a prediction threshold. The prediction threshold is the value above which we will consider a prediction to be positive and below which we’ll call it a negative.

Binary metrics versus threshold-agnostic metrics and when to use each

Some examples of threshold-agnostic metrics:

Threshold-agnostic metrics are particularly useful for helping us choose a modeling algorithm, features, and hyperparameters. We can then use binary classification metrics (like Precision and Recall) to help us choose a prediction threshold. We often do this by comparing tradeoffs in performance across multiple binary classification metrics over multiple thresholds and picking the threshold that yields the best result.

Using multiple metrics and how to choose (tradeoff pairs)

Here are some examples of binary classification metric tradeoff pairs:

Note that Recall is the same as Sensitivity and True Positive Rate! We call metrics by different names depending on how we pair them and the type of our use case.

How to choose your metrics

Precision and Recall both focus on True Positives and are useful when the True Positive reward is greater in magnitude than the False Positive cost. The Precision / Recall pair is well-suited to both balanced and imbalanced datasets.

Sensitivity and Specificity focus on correct predictions and are particularly useful when when both True Positives and True Negatives are important. This pair is also well-suited to imbalanced data. This is the go-to tradeoff pair for disease state tests such as covid tests.

Note that several of the binary classification metrics are reciprocals of each other, meaning that they essentially provide the same information about a model and can be considered interchangeable.

If you can assign a set of costs and rewards to each of the prediction outcomes in your confusion matrix, then you can use simulation to select an optimal prediction threshold. I highly recommend this technique, as it ensures an optimal solution for your business team and comes with the silver lining of a dollars-per-year figure you can say your model (and data science team) contributes to your organization’s bottom line.

To do this, use out-of-sample predictions along with observed or assumed costs and rewards. If your costs and rewards are just a few aggregated figures that correspond the confusion matrix quadrants, then just multiply those values by the confusion matrix counts and sum them to calculate net profit (being sure to represent costs as negative numbers).

If your costs and rewards vary row by row, then you can sample from historical rows, make probability predictions, turn them into binary predictions at one threshold and then sum the rewards of the resulting True Positives and subtract from that the sum of the False Positive costs. (Typically, False Positive cost is not directly known and must be estimated or tested.) Rinse and repeat using a range of thresholds, and then simply pick the one that yields the greatest net profit.

Multiclass classification can be thought of as an extension of binary classification. In fact, you can make multiclass predictions using only binary models.

In One-versus-rest (OVR) modeling, one binary model is trained for every class, using all others as the negative class. In scoring, all models are used to predict the class, and the one with the highest predicted probability is the winner for that observation.

In addition, some modeling algorithms inherently support multiclass classification out of the box. These include many implementations of tree-based algorithms (decision trees, random forests, gradient boosting), K Nearest Neighbors and Naive Bayes models.

Answers (from “What are classification metrics?”):